Skip to main content
The publishing platform created by councils, for councils.
10 December 2021

The new croydon.gov.uk: looking back on going live

Just over six months ago, DNS servers were updated, URLs were redirected, and the main website for Croydon Council switched to being entirely published using LocalGov Drupal.

It was the end of the beginning of our new approach to content – developed, designed and published in-house for users.

It feels like everything has changed since the council published its digital strategy in July 2019. Back then, Web teams, IT and digital delivery were just coming together under a new Croydon Digital Service, and the council’s ageing Drupal 7 Content Management System was sitting top of the “What we will do” list of systems and services that needed review and transformation. 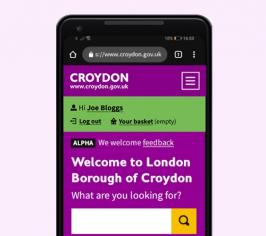 As the council’s first ever website product manager, I jumped at the opportunity to show how an agile approach could deliver great results for residents and businesses in Croydon. Little did I know that this agile approach would be so fundamental to the success of the project and the team’s health and wellbeing, as well as enabling further opportunities for others across the UK.

For the first 1,000 pages which were redesigned, we followed a beautiful agile process. Content was cut into sections of 100 to 250 pages, priority user needs identified, journey mapping sessions were had in partnership with subject matter experts in the service teams, and content was designed, iterated, reviewed and tested with users. We created design patterns that made content more consistent and accessible. Each section took 8 to 12 weeks to redesign.

As we neared the end of 2020, there were some major earthquakes within the council’s governance and finances. New challenges were presented, and we suddenly had 24 weeks to close down the old website. 1,500 pages which were queued to be redesigned now had to be migrated ASAP.

I couldn’t bring myself to only focus on migrating content though. We had built a wonderfully accessible and efficient new site, and it would be a tragedy to migrate the rest of the content without any improvements at all. So I set myself the challenge to find a way improve the user experience as much as possible, with the least resources (time and number of people). I wanted have my cake and eat it. But as a wise man once said: taking on a challenge is a lot like riding a horse, isn’t it? If you’re comfortable while you’re doing it, you’re probably doing it wrong.

Our work split into two streams:

The work to redesign the IA could happen alongside the development of the automated migration, so all team members and skills were employed to their full.

With literally only hours to spare, we moved every single page into a new content structure before the end of March deadline.

The change in approach that the financial pressures brought meant that many compromises were needed. Refinements to design patterns were postponed. Improved features were delayed. The design and development backlog got bigger, and bigger, and bigger.

Since the migration to the new site was complete, the last six months have been focused on clearing that backlog. Hard coded titles and headings are now editable. The design system was made public. Design patterns were made more accessible and available through the WYSIWYG editor. Database caching issues resolved. Code deployment processes refined. The list is long.

How it started / How it’s going

This project started with the objective to transform the council’s website. It’s now one of the leaders of a new Open Source Drupal distribution, benefiting from six figure funding from the Local Digital Fund and a growing community of councils and supporting agencies who, just this month, presented sessions at DrupalCon Europe. The redesign so far has already had a big impact – such as cutting the contact we receive about waste by 20%.

It started with a single agile team, redesigning content and building a platform side by side. It’s now a completely remote team, split into two autonomous squads of content and dev, working from homes and canals across the south east of England .

It started with a relentless focus on user needs. It’s now juggling financial pressures we could never have begun to fear. But those user needs are as important now as they ever were, and the budget and efficiency challenges only provide an even sharper lens through which to approach, research and prioritise our work.

This blog was first published on Croydon Digital in October 2021. Thanks to Tom for allowing us to re-publish it.

Tom Steel has been involved in building, editing and publishing digital content and tools for Croydon Council for 10 years. You can follow him on twitter @tomsteel